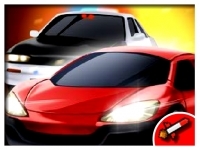 Police Chase is fun driving game suitable for all ages. The aim of the game is to collect all diamonds in the game and stay away from the police. Use rockets to eliminate the police cars. Drive, shoot and have fun. Police Chase 2 is a terrific game which you can play for free in in friv90000.org. With Police Chase 2 game, we supply many cool Friv 90000 games to play at no cost.

Use Arrow keys And WASD button to Drive, Use Move Mouse button to Rotate camera, Use P button to Pause, Use L button to Lock/Unlock cursor,