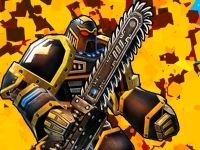 The robot will complete many exciting tasks. He will fly over the city with a jet pack, shoot from the bazooka, escape from the police and the military. In order to survive in the city, the robot has such weapons as a giant hammer, ax, spear, sword and other weapons. A lot of upgrades are available to the robot. For example, you can upgrade strength, life points, speed, obtaining bonus points and coins, jet pack and bazooka using time. Robot Hero City Simulator 3D is a terrific game which you can play for free in in friv90000.org. With Robot Hero City Simulator 3D game, we supply many cool Friv 90000 games to play at no cost.

Use Arrow keys And WASD button to Move, Use Left Mouse button to Attack, Use Spacebar button to Jump,