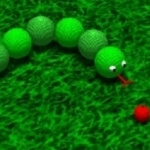 3D Snake is an addictive game based on the classic. Control the snake and gather as many apples as you can without crashing. Controls are quick and easy to learn, and the game is fun for all ages. Collect enough apples, and you might find something interesting in the snake-shop! 3D SNAKE is a terrific game which you can play for free in in friv90000.org. With 3D SNAKE game, we supply many cool Friv 90000 games to play at no cost.

Use Arrow keys button to Move,