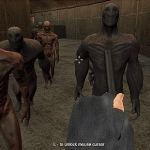 You are trapped in an abandoned bunker dating back to the Soviet era ... You came in this cursed place to investigate on the dark experiments that were conducted here but seeing the zombies and the other monsters that attacking you now... it seems that it's you who've became an experience! Welcome to play Dead Bunker game for free in friv90000.org. Dead Bunker is a wonderful game from our great collection of Friv 90000 games which are updated everytime.