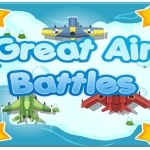 EG Air Battles - HTML5 games is a fascinating and beautiful game in which you have to collect stars, life, ammunition, missiles, fuel and various improvements and destroy enemy aircraft and fighter! Ecaps Games with tons of games for all ages and bringing fun to player Play free online games. Play EG Air Battles online at friv90000.org. You can play it in fullscreen to have fun with it. EG Air Battles is a great Friv 90000 game to play with no cost.