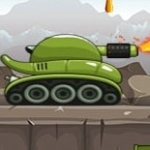 EG Tank Defender is a game about the defense of their territories from enemy invaders, in this beautiful game you control a super tank, the main task is to defend your territory as long as possible from enemy planes and bombs as well as collect the boxes of supplies that reset, your military cargo planes. Hold out as long as possible and show that you’re a real tankman! Ecaps Games with tons of games for all ages and bringing fun to player Play free online games Have fun! Play EG Tank Defender game at no cost at friv90000.org. We provide the best way to keep playing for free. EG Tank Defender is one of our amazing Friv 90000 games.