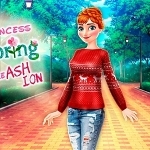 Despite spring has already began, Anna is still into winter. But, you know, new season – new you! So Anna decided to make total refrashion! First of all let’s clean up this mess and remove all the stuff that reminds princess about winter. As soon as her room is clean, let’s refill it with new spring Princess Spring Refrashion is a terrific game which you can play for free in in friv90000.org. With Princess Spring Refrashion game, we supply many cool Friv 90000 games to play at no cost.