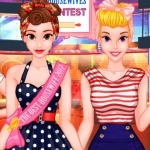 Ariel, Aurora and Belle adore spending time with their families most of all. While surfing the Internet Aurora found the information about a great contest – The Best Housewife 2017 – and had an idea to participate with Ariel and Belle. Let’s see who will be the winner and received the title of The B Princesses Housewives Contest is a terrific game which you can play for free in in friv90000.org. With Princesses Housewives Contest game, we supply many cool Friv 90000 games to play at no cost.