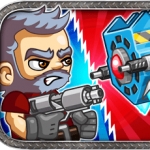 The day has come and robots are taking over the world! You command a team of heroes that have infiltrated RoboCorp's evil factory, ready to strike back.Armed with your amazing agility and powerful gunfire, you will need to defeat wave after wave of hostile robots, and make your way through 30 levels Play Total Recoil game at no cost at friv90000.org. We provide the best way to keep playing for free. Total Recoil is one of our amazing Friv 90000 games.

Use Arrow Left And Arrow Right button to Shoot left/right, Use Left Mouse button to Interact/Shoot,