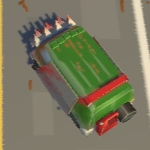 In Zombie Drive, the city has been occupied by zombies, driving your modified car to crashing out of the zombie group, paying attention to multiple collisions on obstacles will accelerate the damage of the modified car, remember to collect fuel and the repair items along the road. Zombie Drive is a great game that you can play for free at in friv90000.org. Regardless Zombie Drive game, we provide many cool Friv 90000 games to play for free.

Use Arrow keys And WASD button to Drive, Use P button to Pause, Use L button to Lock/Unlock Mouse Cursor,